Your guide to game meat There’s nothing quite like that first bite into a succulent steak, saucy skewer or sensational sausage.

Meat lovers know the joys of exceptional quality and an experienced chef. And when it comes to game meat, the dining experience can reach a whole new level.

So, what separates Game meat from other cuts of meat and how can it transform your palate and appreciation for flavour:

What is Game Meat?

Game meat is any kind of meat that has grown up in the wild and been hunted for food – rather than raised on a farm as a food source.

While this means that it typically involves different kinds of meats than you would usually find in stores and restaurants (such as chicken and beef), it can also change the meat itself.

Game meat is the original ‘free range’ – these animals roam in the wilderness, eating entirely natural diets of what’s available. This means there are no hormones or antibiotics in the meat, only whatever natural food sources the animal could find in the wild.

For some, game meat is a great option if they prefer not to eat animals that have been raised on farms, or if they’re unsure about what kind of lifestyle or diets those animals have had.

Keep in mind, game meat is largely only allowed to be hunted with approval. For example, certain states and territories may add or remove animals (such as deer) from their list of approved game meats, which means approved hunters may hunt them (usually also with approval from the land owners). This can be an eco-friendly and practical way to control rising populations.

Now that you know what game meat truly is and where it came from. Allow us to transform your dining experience to go beyond expectations. Have a look at Hunter & Barrel’s menu today!

What are the main types of game meat?

In Australia, there are a number of animals that are counted as game meat. Here are some of the most common types of meat hunted in Australia.

Venison: Venison is popular game meat that provides a variety of tasty cuts that have a subtle gamey meat flavour. Venison is also a slice of highly lean meat, making it high in protein but low in fat.

Kangaroo: Kangaroo is common game meat in Australia as it helps to keep the numbers of wild animals under control. But for diners, kangaroo meat is an exceptional dish that’s 98% fat-free and very high in protein. It’s also the highest-known dietary source of linoleic acid, which supports heart health.

Boar: Boar hunting is a popular pastime for Australian hunters, but hunters are only encouraged to shoot what they can eat. Boar meat is often described as tasting like a cross between pork and beef, offering a succulent meaty flavour and ample tenderness.

Rabbit: Rabbits are extremely populous in Australia, but hunting helps to control their numbers to reduce their negative impact on the environment. Fortunately, it also provides lean meat with a delicate flavour for diners.

So, come on over to Hunter & Barrel and book your table or contact us for more information from one of our friendly staff today.

Reserve your table with Hunter & Barrel in Melbourne or Perth to feast on your choice of steaks, skewers, sausages, and more. 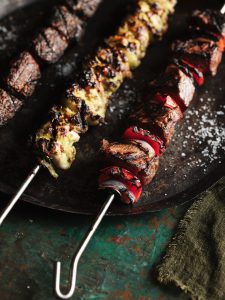 What Meat Is Good For Skewers?

A question that is asked quite often is what meat is good for skewers? Meat skewers are one of the most loved ways to enjoy 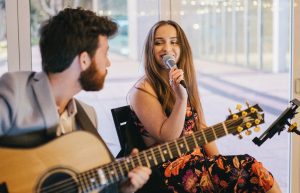 The combination of good friends, delicious cocktails, delicious food and live music is exactly how we want to spend our Sunday afternoons at Hunter & Barrel.